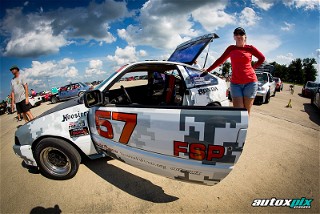 Renee Hines is the topic of this installment of Take 5.  She is an autocrosser, a driving instructor, a SCCA Club racer, and the Crew Chief for a fairly well known Track Night in America sponsored Honda Civic Si. It's no wonder that she has her own hashtag: #Reneeisrad.  Find out more, by reading the story below.

JH: When, and how, did you get involved in autocross?

RH: I didn’t actually start autocrossing until I was 39.  Scott Giles took me to my first event, I think it was 1998 or '99, when we were down in Atlanta, GA.  Anyway, we went to the event, and Scott asked if I wanted to drive, and I said sure. Now mind you, we were there in his Acura Integra which I had never driven before. So I mentioned to him that i should probably at least take it for a quick spin around the parking lot to get a feel for it. It was kind of funny, because it was only his second event, and I ended up helping him find his way around the course.  Scott loves to tell people that story. “If it hadn’t been for Renee, I wouldn’t have even driven the course correctly.” But that was my first autocross.

JH: That is a later start than most, I would presume.  Were you always into cars, or did you kind of fall into the car thing at that point?

RH: I grew up around cars.  Brother on either side of me, and I have older sisters that did the housework and dishes.  So I ended up being one of the “boys” and did the “boy” chores.  I helped dad work on the tractor and lawn mower, and we rode motor bikes to run cattle.  So I don’t know if that did it, or what.  I never really played with dolls, I played with G.I. Joes. I can’t really pinpoint when I got into cars, but I was always the tom boy playing with cars or working on something mechanical.

JH: So was autocross your first form of racing or motorsports?

RH: No, when I was 19 my older brother had a little Super 6 Camaro that he did dirt track racing with, down in Savanna, GA. Well they were doing a Powder Puff race, and his wife didn’t want to get in the car, so he put me in the car instead.  I not only won, but ended up running better times then he did! So he modified the car for me, and I ran that for a few years. And once my brother built that car for me, I was kind of hooked on driving.

JH: The Women’s Initiative has obviously been a big topic this year.  I have heard that you are involved in a similar way outside of the sport. How so?

RH: I am obviously a member of women’s groups at P&G.  And those women’s groups sponsor events, or learning events quite often.  We bring in speakers, or have a book club, and so forth.  So I decided to hold a seminar on general car care, which I have done every other year for quite a few years now.  I told them, you bring your car in and I will teach you how to do general maintenance on your car, or teach you about your car so you don’t get taken when you take your car in to be worked on.  We started off and it was mostly the women managers, but then we extended it to all the women in the plant.  But recently I offered it up to all the interns, of whom we have 50 total, male and female, and I ended up having 27 show up for the seminar.  Including a few of the guys.  I was amazed and pretty excited about that turn out.

JH: So, we all know autocross isn’t the only motorsport in the world, and I know you are involved in several facets of motorsports.  What all have you been up to this year?

RH: Well, besides autocross in Dewey, Scott and I do a lot of driver education events with Badger, our 1987 CRX.  I also still hold a competition license for Club Racing, which is mostly about driving the ARRC (the American Road Race of Champions) each year. And this year, I was really excited to split driving duties with my favorite driver, Tom O’Gorman, in the car I was Crew Chief for this year, our Pirelli World Challenge Championship winning Honda Civic Si.

JH: So I am going to break a rule here, and add one more question.  How did you guys do?

Of course. So Rad.