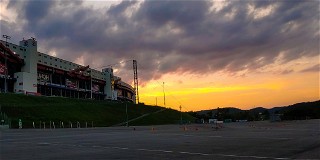 The 2020 Tire Rack SCCA® Championship Tour spent its holiday weekend at Bristol Motor Speedway, the second half of a ProSolo/Champ Tour doubleheader weekend on Saturday and Sunday, July 4th and 5th.

David Marcus’ B Street Supra rattled off a spectacular third run on the first day to open up a sizeable lead over Darren DiSimo and Win-hou (Tony) Chow, both in BMW M2s. The second day was once again kind to Marcus, who stretched his lead and took a class win and capped a successful Tennessee swing that included a ProSolo Super Challenge finals appearance.

G Street was filled with lead changes throughout the weekend. Two runs in, it appeared that Chris Harp and Tommy Pulliam would be the class of the field in Honda Civic Sis, but Max Bales jumped to the day one lead with a flying third run. On day two, it took Harp until his third run to reclaim the lead, leaving Pulliam with one last chance at the class win. Pulliam knocked Bales back to third, but didn’t have enough to overtake Harp, giving Harp the victory by 0.047 second.

After running in a Corvette during the pro, Mike Casino jumped in Adam Norton’s Street Turing Ultra Fiat 124 Spider for the Tour. After day one, Casino led over the car owner by 0.249 second but cleared the third place car by more than three seconds. Casino stretched the lead and the win over Norton on day two, with both leaving the field in the dust.

Solo Spec Coupe saw a commanding performance from Matt Waldbaum, who led by more than a half second on the opening day and doubled up on that by the finish. Behind him, the trophy positions were close with Thomas Lackey taking second place by 0.094 second over David Spratte in third. G H Sharp claimed the fourth and final trophy 0.215 second behind Spratte.

Will Teller marched to the C Street lead on his second run of the weekend, with Christian Kolmers and John Wolf following close behind. After the Saturday-night firework show, Teller held onto his lead to take the win by 0.580 second, but the second and third place runners flipped. Wolf bested Kolmers by just 0.104 second. Rick Cone kept the podium finishers in his sight to take the fourth and final trophy.