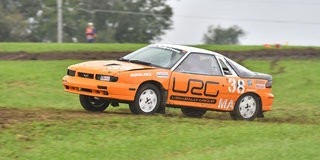 The 2020 DirtFish SCCA RallyCross® National Tour scheduled has been locked in. This year, competitors will have the opportunity to step beyond Regional and Divisional competition at three different premier locations across the nation before heading to the renowned Road America for the DirtFish SCCA RallyCross National Championship on the weekend of Aug 14-16, 2020.

The 2020 National Tour season kicks off April 3rd-5th in the heartland of America near World Wide Technology Raceway at Gateway in Madison, IL where competitors will be faced with 30 acres of some the most challenging dirt the St. Louis region has to offer. Next stop on the tour travels to the Pacific coast at Thunderhill Raceway Park in Willows, CA on June 5th-7th. Thunderhill’s dedicated and newly-revamped “Dirt Track” will offer challenging, but fun conditions to our entrants. The last stop before heading to Road America for the National Championship will bring us back to Ross County Fairgrounds on June 26th-28th in picturesque Chillicothe, OH situated between Cincinnati and Columbus. This site on the National Tour promises lots of wide-open space for large, sweeping courses with some of the best dirt this side of the Mississippi.

“The strength of the 2020 DirtFish National Tour calendar is in the quality that we expect from these events,” Mike King, Director or Rally and Solo said. “Each of these areas already host strong regional and divisional events. We anticipate the pull of the National Tour will boost the quality and the quantity of competitors even higher.”

The SCCA is proud to have DirtFish back for 2020 as the title sponsor of the National Tour series. DirtFish is widely considered to be “the most prestigious rally school in North America.” They strive to provide the highest level of rally driving instruction, top level cars, and gorgeous facilities all year round. Check them out online at www.dirtfish.com.

RallyCross is the SCCA’s most widespread and readily accessible form of extreme dirt motorsport. SCCA RallyCross® is a scaled-down version of a rally stage laid out on a non-paved plot of land where the course is delineated by traffic cones instead of trees or rocks. Participation requirements are considerably less than those associated with other forms of performance rally, so drivers usually only need a mechanically sound, hardtop vehicle and a helmet to come play in the dirt.

National Tour events mimic the DirtFish RallyCross National Championship. However, there is room for local organizers to insert local “flavor” to an event, with the objective being to allow for some experimentation of new concepts/procedures. The exact degree of variance is coordinated with the RXB and National Office. All 11 official RallyCross national classes may compete at National Tour events, but there is also the potential to include a limited number of local classes to bolster attendance and interest. Each National Tour event includes two days of competition on at least two courses with between six and fifteen scheduled runs.